May 40 Be Your Best Year Yet

A few years ago I was out at a Block Busters with my mother and sister. Yes, I know... renting a movie? How primitive! We are the type of people that would scan the store looking for that random new release that you may not have heard about because it was straight to video or was only in select theaters for. One day we stumbled upon a title that none of us had heard of. It was a horror film with the tag line, "If you can't find a friend... make one." This film is called May. It is about a lonely woman that is still trying to deal with her difficult childhood while trying to find a connection with people around her. This is a great movie and is one of my favorites to date. One of the key elements that made this film so amazing was the casting for the lead role of May, played by Angela Bettis. 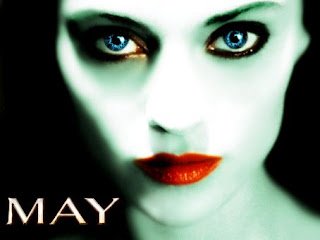 Angela Bettis is an amazingly talented woman. She is an actor, writer, producer, and director. She has been in her fair share of television shows, indie films, and has even made her directorial debut. In the past few years she has worked very closely with two talented men (Kevin Ford and Lucky McKee) that, in my opinion, helped make her the cult icon that she is today. Before I get into her collaborations and relationships with these two fellas, I would like to give some background info about Angela. 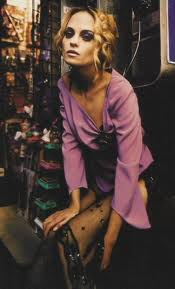 First off, despite this being a day late, I would like to say Happy Birthday, Angela! Angela was born January 9, 1973 making yesterday her fortieth birthday. Angela has a twin brother named Joseph, so Happy Birthday, Joe! They were born in Austin, TX. Angela graduated from Westlake High School. Shortly after she had her first role in a film called "Sparrow". She was the main character in this film. After getting a taste for movies she attended and graduated from the American Musical and Dramatic Academy in New York, NY. After graduating and five years after her acting debut, Angela began getting acting jobs. 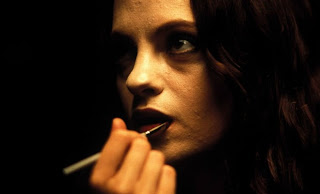 She started with some television shows like Touched by an Angel, Legacy, and Sliders. They were small roles, but they helped her to get her foot in the door. A year later she got her first role in a major film, Girl, Interrupted along side names like Winona Ryder, Angelina Jolie, Whoopi Goldberg, and Brittany Murphy. Angela played the role of Janet Webber, a patient with an eating disorder. It still breaks my heart when she falls to the floor in tears saying, "That is not fair. That is not fair!!!! that is not fair! Seventy-four is the perfect weight."

The next big movie for Angela would do is called "People Are Dead". This film wasn't mainstream, but I call this a big movie for Angela because this is the first time she will work with Kevin Ford, who is now her husband. "People Are Dead" about a group of disconnected people that are brought together by string of events in post 9/11 Manhattan. Kevin wrote, acted in, and directed this film. He also produced the film with the help of Angela and one other. Since this film, the two have worked together on several films in various roles (not just acting or directing). Some films they worked on together include Wicked Lake, When is Tomorrow, and Toolbox Murders.

The next big film that Angela would starred in is May. It is really hard for me to explain my love for this film. This film, more than any other of Angela's, is by far her most notable. I am not sure why, but it seems that many people that have seen May just fall in love with it. Maybe it's because on some level we can relate to May. At one point in time we have all felt lonely and all we really want is a good friend. Not to mention, sometimes we do stupid things because we think it will make us happy and feel better despite the consequences, assuming that we can even register what those consequences might be. This film is not only awesome in my book, but also won Angela a few international awards for her role in it as well. This was also the first time Angela would work with director Lucky McKee and would be far from her last.

Lucky McKee is a director, writer, actor, producer, and composer. Some of his films include Red, The Woods, Blue Like You, The Woman, and May. Lucky is also one of the few horror directors to make a film for the Masters of Horror Series titled Sick Girl. Coincidentally, all these films have Angela in them. Heck, Blue Like You was one Kevin was involved with as well. There is another film that all three had a part in that I h have yet to mention and that one is called Roman.

Roman is the film that features Angela's directorial debut. This film is about a lonely man's obsession with a neighbor that leads to murder, which leads to lies, and leads to a new budding romance... I know, weird. I haven't watched it yet, but it is in my Q. The script for this film was written by Lucky and he also acts in it as the main character. Kevin was the cinematographer and helped with the editing alongside Angela. This was the first time that Angela and Lucky's typical roles were reversed, which made for an interesting filming.

Apart from these films, you may know Angela from some others. Next to May, her most popular role would be her portrayal as Carrie White in the 2002 made for tv reboot of the classic horror film originally written by Stephen King. She was also in Drones, My Alien Mother, Scar, and had a brief role in the tv show Dexter.


So, what's next for Angela? She is getting ready to be in Kevin's newest film, Legs. This one is about a Hollywood rock star that is desperate to lay low for a while, but a past love is making that hard to do. I don't know much more about the film than that. It is currently in post production and the cast and crew has been released for inquiring minds.

Overall, I think Angela Bettis is an awesome woman with so much to contribute to the horror genre and I can't wait to see where she goes from here. She has found her niche in taking on roles of awkward women that are shy, anxious, and unstable. If you haven't seen any of her dozens of films, I suggest you start with May and if you like it, keep going.
Posted by AGhoulsBestFriend at 2:38 PM