Okay Boils and Ghouls, it's quiz time! What do you get when you cross athleticism, fearlessness, and a beautiful woman? If you said a ninja cheerleader then you need to lay off the B Rate horror movies! However, if you said one hell of a stunt woman then you are correct and if you said Zoe Bell then you pass with flying colors! Today I am going to gab about this kick ass lady!


Zoe Bell has been in dozens of films and even a few well known television shows. One of her first gigs was being the stunt double to Lucy Lawless on the show Xena: Warrior Princess. She has also done work on several of Quentin Tarantino's films, most notably, Death Proof where she played herself.

I have always been fascinated by stunt men and women, especially Zoe Bell and Kane Hodder, so I thought I wanted take the time to learn more about one of them for the time being (because if you think there won't be a post about Kane Hodder, especially after his bio comes out you got another thing coming!). Anyways, back to Zoe! 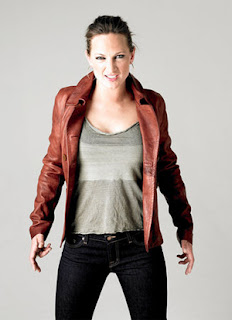 Zoe Bell was born November 17, 1978 in New Zealand. Her parents are Tish and Andrew Bell, both are in the medical field. Her father is a doctor and her mother is a nurse (Talk about handy!). She hass a younger brother named Jake.When she was very young she began participating in gymnastics. When she reached the age of 15 her interests in physical activities broadened. She began to study Taekwon-Do, scuba diving, high diving, dance, and track and field sports.


In 1992, her father was working at a hospital treating a stuntman that was injured on the set of a local soap opera. Her father saw this as an opportunity and arranged to Zoe to call the coordinators for the show and thus landing her first job as a stunt woman. Her first stunt was to jump from a moving car. She did so well that she landed a regular job with this soap opera until 1995 when she picked up a role on Xena: Warrior Princess. She also did work on the show Hercules: The Legendary Journeys while working on Xena. However, some of the roles she became most well known for didn't come around until 2003 when she was hired as a stunt woman in Kill Bill Volume 1 and 2. These were her first roles in a Tarantino film. She started out being hired as Uma Thurman's "crash and smash double",  but soon after the crew saw what she was capable of they also hired her for the film's fight scenes. Her work in these two particular films earned her nominations at the Taurus World Stunt Awards for Best Overall Stunt by a Woman", "Best Fight", and "Best High Work".


Now, with all stunt people there is a high chance of injury. Unfortunately, Zoe has been injured performing stunts in the past. While she was filming the last bits of Kill Bill Volume 2 she was doing a stunt for Uma Thurman's character where she is thrown backwards by the force of being shot by a gun. Zoe suffered injuries to her ribs and the ligaments in her wrists. She ended up needing surgery and had to spend a few months recovering.


Her most well known role in a Tarantino film was playing herself in Death Proof. In this film her biggest moment in the lime light is what made this film! Her main scene involves her on the hood of a 1970 Dodge Charger while the car is being driven at highway speeds as Kurt Russel's character repeatedly hits the car with his own. Naturally, Zoe did all of her own stunts in this film.  If you have not seen this film, you must!


In more recent years, Zoe has been involved in a lot more films playing roles and not just doing stunts. One of my favorites is the film Whip It!

In this film Zoe plays a team member on a roller derby team with the derby name, Bloody Holly! This is a kick ass movie too!

If you want to know about more films that Zoe Bell has been in, check out her IMDB Profile and if you live in the Maryland, Virginia, Pennsylvania area, she will be at the Horrorfind Weekend this year! and Yes! I already have my tickets!!!!!


Posted by AGhoulsBestFriend at 10:33 AM