Back in June, I went to the Maryland Film festival at The Charles Theater and saw a film that made my heart melt. I was going to make a post about the film, but time was not on my side and before I knew it, the summer was over. I went to a showing of this film again, last night to be exact, and with everything still fresh in my mind, I would love to share my experience and thoughts with my sweet and twisted readers. 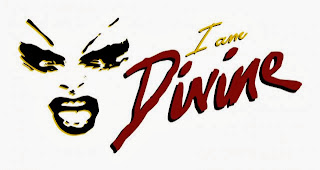 The film I saw is a documentary on the one and only Divine! Anyone that knows me can tell you that this is a film I have been waiting to be released for freaking ever! The second I found out that this was in the works I began following the I Am Divine film on every social networking site under the sun. 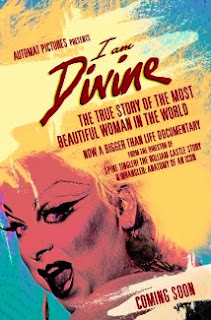 For those of you who do not know who Divine was, let me take a moment to get you in the loop. Divine is a man from Baltimore that most commonly known for being in the early films of John Waters. He typically had the lead role in these films, often portraying a female character. Some of his films include Female Trouble, Polyester, Lust in the Dust (this is not a John Waters film), Multiple Maniacs, Hairspray, and the notorious, Pink Flamingos. In between these films, Glenn (the man behind the make-up and character of Divine), toured, recorded music, and even performed on stage. He spent time in New York acting in plays and in California working with a group called The Cockettes.

There were many aspects of the character Divine that made him stand out. First off, Divine was not a small person. He usually weighed around 300 pounds and being that size and dressed like a female was quite a sight. Now add in the fact that he wore outfits a large woman would never dream of wearing the having eyebrows and eye make-up so loud that half of his head was shaved to make more room for them, you have yourself one heck of an attention getter. To say Divine stood out was an understatement. Everything about this character was big and loud, including his personality. Divine was loud, crude, perverse, in your face, and a shit stirrer. Divine wasn't just a some character Glenn played, Divine was a force to be reckoned with. 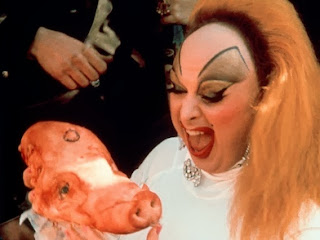 I Am Divine is a documentary that told Glenn and Divine's story. Since Divine passed away in 1988 there was no interview or where are they now aspect to this film. However, it is filled with lots of behind the scenes footage, recorded stage performances, and interviews with Divine. On top of that, it is filled to the brim with interviews from John Waters, drag queens, film critics, fellow Dreamlanders, fellow cockettes, agents, and even Glenn's mother, Frances Milstead. Everyone has such wonderful antidotes to share about Divy. 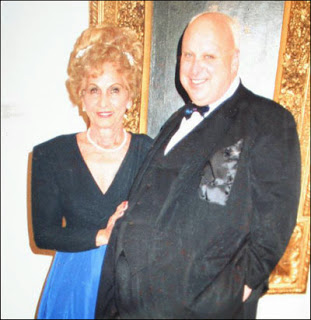 The only thing about this film that is awful is knowing how it will end, with Divine passing away. Each time I have seen this I have cried. It's sort of like watching Titanic, you get so wrapped up in the story and the music that you secretly hope they don't hit the iceberg and everyone has a safe trip. What makes this film so hard to watch is knowing that by the time Divine is finally getting recognized for the amazingly talented performer that he is, he dies. That being said, as many tears as I cried while watching this, I had five times more laughs throughout the film. Let's be honest, you can't watch a movie about a cult film performer dressed as a woman and not have a good laugh.

When I saw this film last night, I was at the historic Senator Theatre on York Road. This theater has quite a name for itself. Many movies filmed locally premiere at this venue including, those by John Waters. I'm bringing this up because the first clip you see in I Am Divine is of John and Divy at the premiere of Hairspray outside of the Senator. This is also the same place where the beginning of Cecil B. Demented was filmed as well. It was surreal to watch a film about someone who had spent one of the happiest days of their life in the very same place I was currently at. It as a wonderful film about an amazing person and I can't wait to see it again! 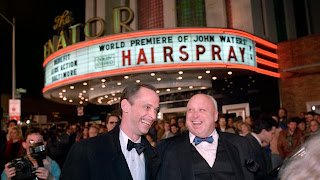 Until next time, stay sweet and twisted!