Sweets to the Sweet

So, did you hear the story about the lady that was away on vacation. One night while she was sleeping a spider crawls across her face, stops on her cheek, then trails off her face. The next day she sees a large red dot where the spider was. As days goes by the "spider bite" gets bigger, redder, and more sore. She goes to the doctor to have him pop the boil that has formed and as he does hundreds of baby spider come pouring out of her face. 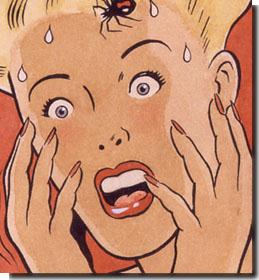 What? You've heard that one... How about the one where a lady lives alone with her dog and one night while watching tv she hears about a lunatic that has escaped a mental institution. In the middle of the night she hears a strange dripping noise. She goes to turn on the light, but the power is out. To reassure herself that everything is okay, she reaches under her bad to pet her dog and feels him lick her hand. She keeps waking up to the strange dripping noise, but always checks for her dog and feels him licking her hand. When morning comes she sees her slaughtered dog hanging from her bedroom door and on the wall in blood is written, "Humans Can Lick Too". Heard that one too, huh. Well here is another tale you may have heard of that I am going to tell anyway. 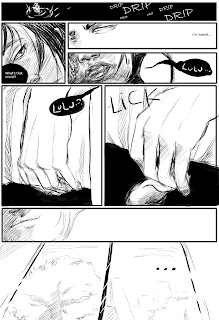 It's about a young man whose father was a slave. When he grew up he became a talented and well known artist. He falls in love with a white woman and she becomes pregnant. This does not fly well with the locals. The young man is chased and when he is caught his captors they cut his drawing hand off and replace it with a hook. As if that wasn't enough, these vicious people smear honey all over the young mans body and let bees sting him to the point of death. This young man has been nicknamed The Candyman. Legend has it that if you look into a mirror and say his name five times you will summon Candyman and he will kill you with his hook. Okay, so maybe this story, like the other two, is just another urban legend, but it sure made one hell of movie that not only spawned a trilogy, but helped redefine the horror genre and revive slasher films for a new generation.

The slasher film is a sub-genre of horror films. Slasher films are easy to point out because they typically have a seemingly unstoppable killer, a body count of four or more, and the victims are killed in a violent manner that goes beyond a simple stabbing or gun shot wound. These types of films have been around since the 1930's and have paved the way for minds like Alfred Hitchcock, Dario Argento, and Wes Craven. Slasher films became more like exploitation films in the 70's with films like The Last House on the Left and The Texas Chainsaw Massacre. This was also the decade that would spawn Black Christmas and the Halloween franchise. The 80's decade is known as The Golden Age of slasher films. This is when films like A Nightmare on Elm Street, Friday the 13th, The Burning, Prom Night, and Sleep Away Camp were made. Most of these memorable slasher films came out in the early 80's and by the time the 90's started rolling around, the slasher film craze began to dwindle. Many slasher films were going straight to video with no chance of ever becoming box office hits. However, in 1992 one film would change all of this and wake up the 90's generation with a scary man with a hook for a hand. 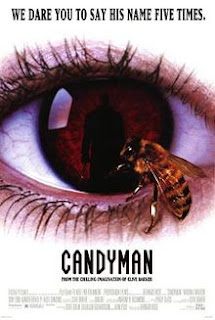 Candyman was the revival the slasher genre so greatly needed. This film was groundbreaking for it's time, even though it may not have seemed like it at the time, and to this day may still seem not as important to the genre as it really should. First off, Candyman was the first black slasher film anti-hero. It's true, Blacula does not count as an anti-hero because he is not a part of the slasher film sub genre. Blacula is considered blaxploitation, I did some research. This was also the first slasher film to be placed in an urban setting helping to pave the way for films like Hood of Horrors. Candyman also made over $25 million dollars at the box office. I am sure this helped plant the seed to future slasher films to come because in the end the math is there and money talks. Soon after, the 90's had their own wave of slasher films that were no longer straight to video. Some of the most popular slasher films of the 90's include New Nightmare, I Know What You Did Last Summer, Halloween H20, and Scream (one of my favorites). Unfortunately, the slasher films of the 90's were nothing compared to progenitors of the 80's. The slasher film craze has continued to grow to this day with amazing films like House of 1000 Corpses to the remake of My Bloody Valentine. There are remakes and sequels being made every year helping the slasher film sub genre to continue to thrive. 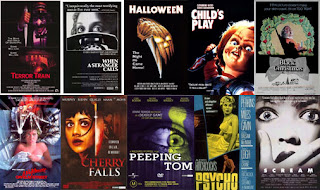 Now, to keep this post about Candyman, I am going to give you some fun trivia about the film.

1. Today is the 20 year anniversary of the US release of Candyman. 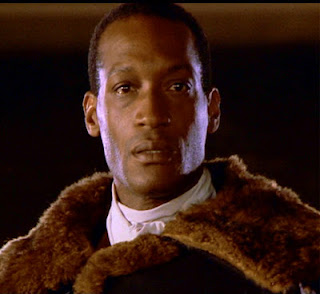 2. Real bees were used during the filming. The bees were only 12 years old so that they would look like fully matured bees, but still did not have a stinger. 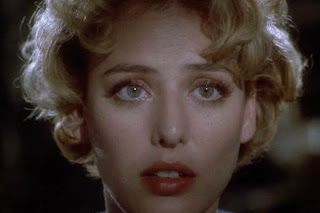 3. When Candyman opens is mouth and it is filled with bees it is real! Tony Todd had a mouth guard to prevent bees from going into this throat, but that was all. 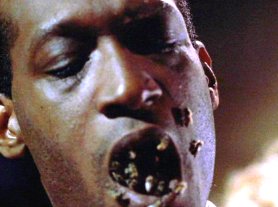 4. Virginia Madsen, who plays Helen in the film, is deathly allergic to bees. As a result, there was always an ambulance and medical crew on set. Virginia Madsen was also hypnotized for scenes she did with bees in them to keep her calm. 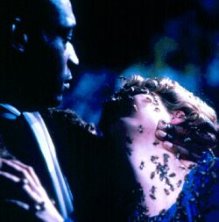 5. If Virginia Madsen hadn't been able to play Helen the part would have gone to Sandra Bullock. 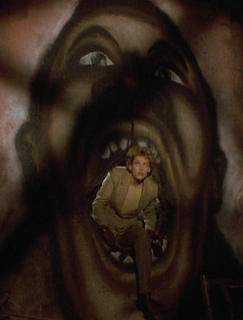 6. Eddie Murphy was considered for the role of Candyman.

7. The film was set in the infamous Cabrini-Green projects in Chicago. This area is in gang territory and in order for the hall and stairway scenes to be shot there, the producers made a deal with the ruling gang to use them as extras to ensure the cast and crews safety. However, the last day of filming, a sniper shot a bullet through the production van. Luckily no one was injured.


8. Candyman is based on a short story by Clive Barker called The Forbidden. The story was set in England, but was changed to Chicago for the film.

9. While director, Bernard Rose, was doing research he discovered that there were medicine cabinets that led to other apartments in the same building and that there were a series of murders that occurred this way including one at the real Cabrini-Green.


Okay, well I hope you enjoyed this brief lesson on the slasher film revival as well as my Candyman birthday lovin!
Posted by AGhoulsBestFriend at 5:30 PM