Today I am going to breathe the life back into my blog with an interview! It has been far too long and I have an amazing artist that my readers need to hear about! Allison is the ghoul and horror is her bag. I came to know Allison and her creative side through the power that is Etsy Teams. We both belong to The Etsy Massacre Team, a group of artists that specialize in horror. I could gush about this gal all day, but I think I will let Allison tell you a bit about herself and her work. 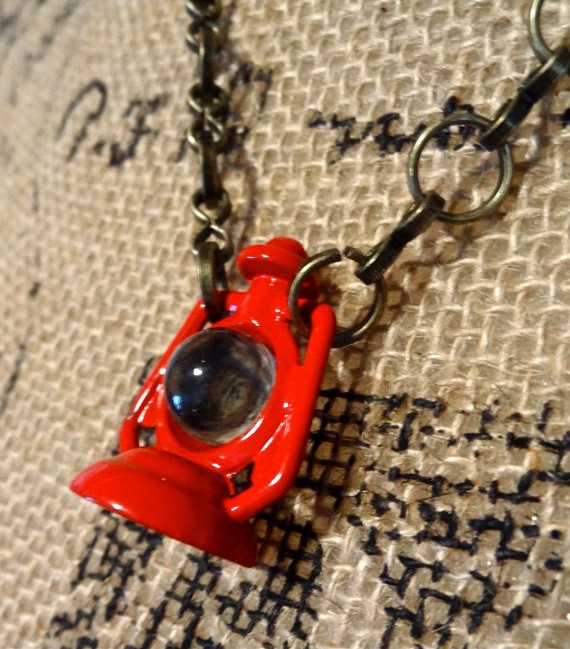 Hi! My name is Allison (nice to meet you). I’m thirty-four years old. I’m happily married and I am a proud mother to a rambunctious and hilarious three-year-old son. I have a full-time career that has nothing to do with art or horror (sadly), and so I opened Prim and Grim for fun. I live near Denver, Colorado with my family and two furry family members named Blag the Ripper and The Black Dahlia, who are both black, cuddly, and awesome. Blag was rescued from a dumpster and Dahlia was born on Halloween. I love horror and Halloween, and I have an Etsy shop called Prim and Grim that sells creepy chic housewares and jewelry. 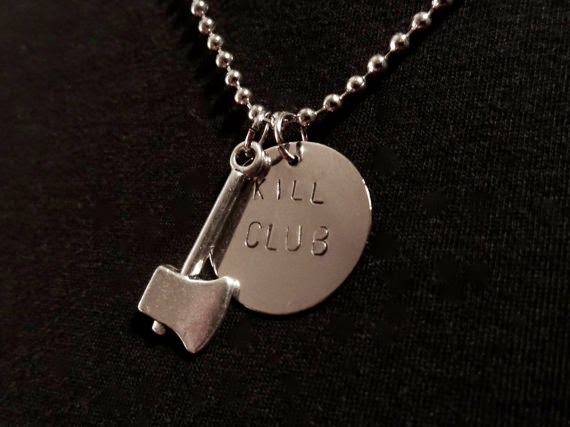 1. When did you start crafting and how did you get started?

I’ve been artistic going as far back as my memories allow, but if I had to pick a specific time that I really got excited about crafting it would have been in kindergarten. There was one particular activity with crayons and hot plates that I think really sparked my passion for arts and crafts. Using electricity to heat and melt crayons made regular coloring boring, and the way that melted crayons looked on paper was just… So… Awesome! I still get excited about it even though my adult self wouldn’t sit down and melt crayons. 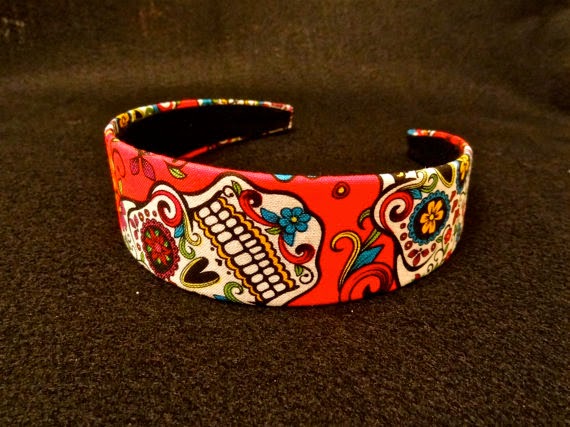 As far as crafting with the purpose of opening an Etsy shop, I think it really began when I discovered steampunk a few years ago. Awhile back, my mom had bought me this jade pendant for my birthday. The jade was so valuable (both emotionally and monetarily), and the cord that it came with was so cheap and boring, that it seemed a disservice to the jade itself to wear it that way. So instead of wear it, it just sat in a drawer for years. When I discovered steampunk, I discovered it in the form of jewelry. It wasn’t as popular as it was now, so finding a wearable jewelry version wasn’t as easy. I decided to try to make myself a Steampunk necklace with the jade pendant as the center. Finally, I had a cool way to wear my birthday present! I wore it to a party one day and someone asked me if I was an artist… I had never considered myself one before. I said, “No, I just make jewelry occasionally,” and the person replied with a firm, “No, you are an artist. You should open a shop.” 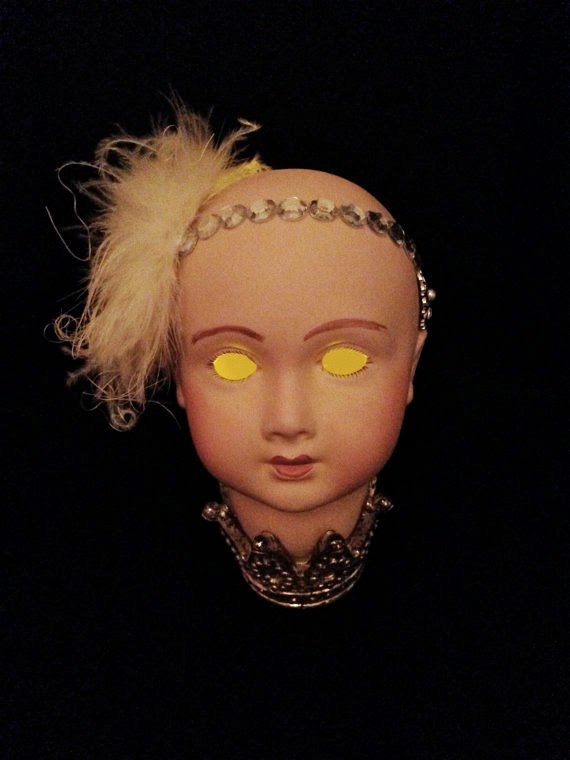 2. Which came first, the accessory making or the recycled items you have turned into home decor items?

The accessory making definitely came first. I had spent hours and hours searching for accessories online that fit an idea that I had pictured in my head. I became frustrated and started thinking about it, and decided that there must be other people out there who like the same things that I do… and since I can’t find what I want, I’ll just make it myself! 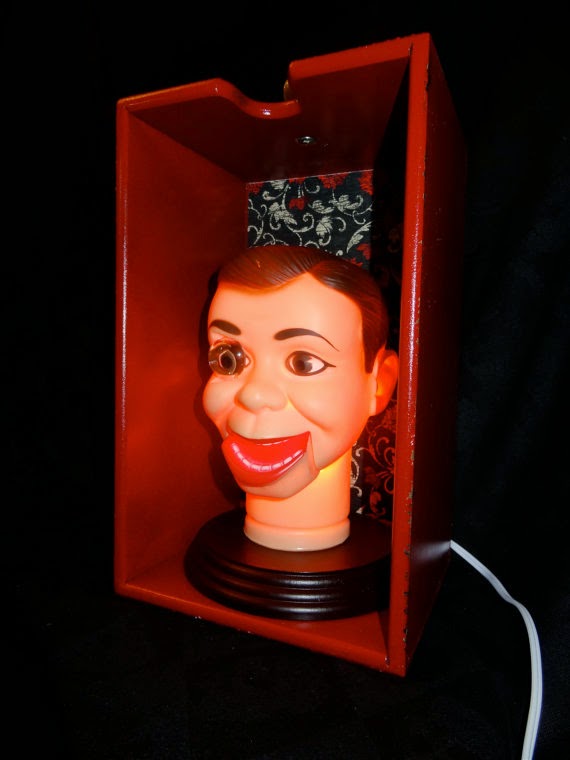 3. One item that caught my eye right off the bat was the Green Mannequin Lamp. How did this item come to be and what inspired you to turn this head into a lamp?

Awesome! When I was toying around with the idea of opening an Etsy shop this is actually the first item I thought of making! I actually wanted to keep it, but decided that my son would either break it or be afraid of it, so I decided to sell it. When I saw this amazing, green, art deco head I was already playing with the idea of making an industrial lamp (albeit a more “normal” one), and instead I decided that this head would just look so cool all lit up. 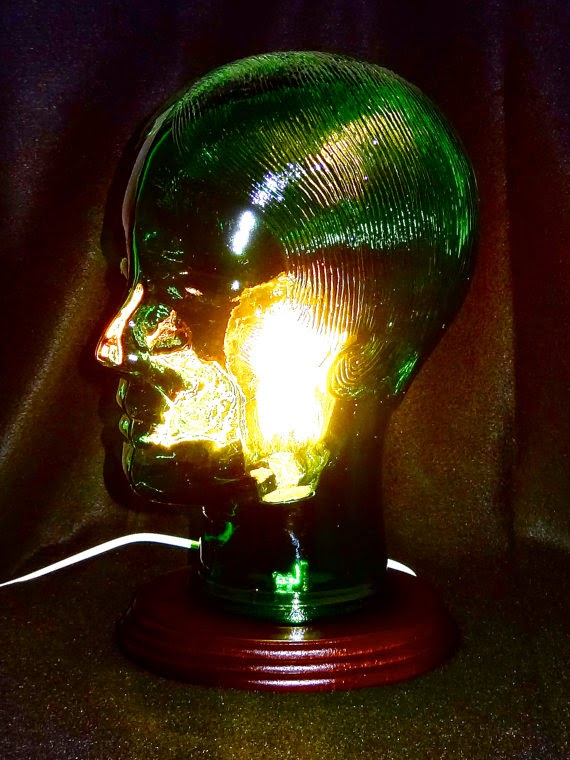 4. When making a home decor item with an item like a glass head or an old medical teaching aid, do you usually have an idea first and seek out an item or do you stumble upon an item that inspires you and go from there?

I absolutely get inspired by the item. I will look at something and decide if it strikes me as odd, unique, or creepy, and think first, “I need that.” And then, “what can I do to make this even more interesting?” From there the whole thing develops organically. 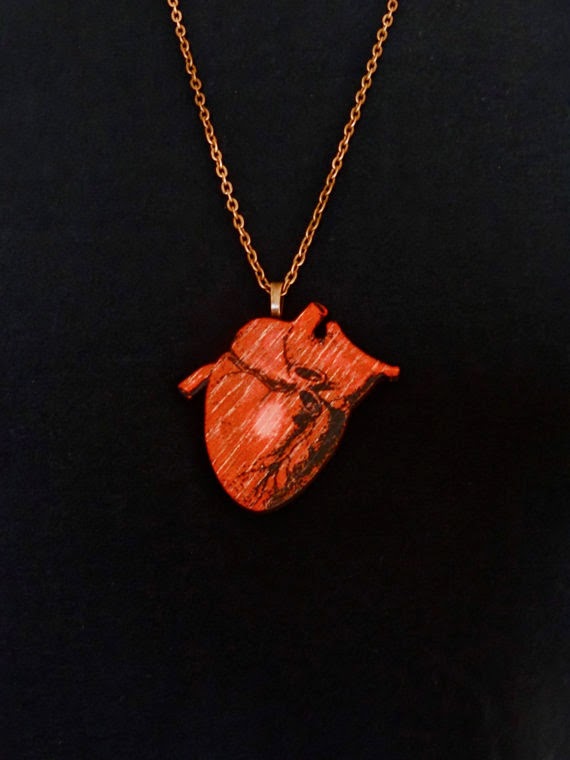 5. When I checked out your retro section I was somewhat surprised to see as many war and military themed items. I find many shops tend to focus more on pin up models or a zombified pin up vixen. Do you have any plans on expanding this section of your shop? What other items would you like to add to your retro section?

Yeah, it is kind of an odd thing to find in a shop that mostly sells horror stuff. Kind of a weird mix of things to sell. I had struggled a little bit internally with the idea of selling such different things in one shop… horror, WWII, art deco… perhaps these things could be separated into their own shops, but when you think about it, history can be pretty horrific! When I make the war and military-themed stuff I find it personally haunting. 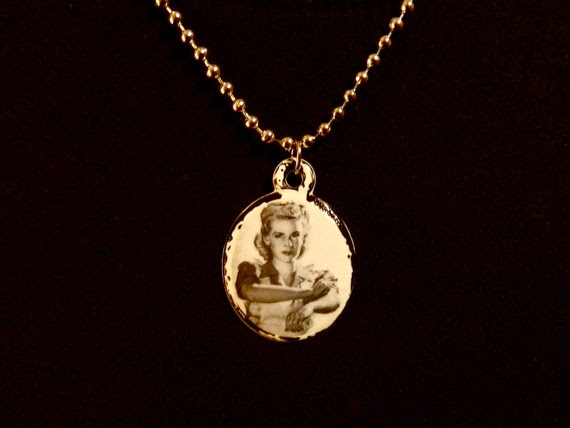 I’d like to add some authentic vintage items into this section, because nothing is better than authenticity when it comes to history, but I just struggle with the idea of altering historical items from their original form. I recently sold a line of Victorian sea tumbled pottery shards that I turned into pendant necklaces, and that’s about as far as I would let myself go in altering the pottery. My main audience is horror fans, so while I will always have some retro things in the shop, the retro section will not be expanded much more than it already is.

But let it be known (shout it from the rooftop) that I LOVE pinups and zombies… but so many other shops do this so well already… I’ll leave that to them and just dress up as a zombie pinup instead. 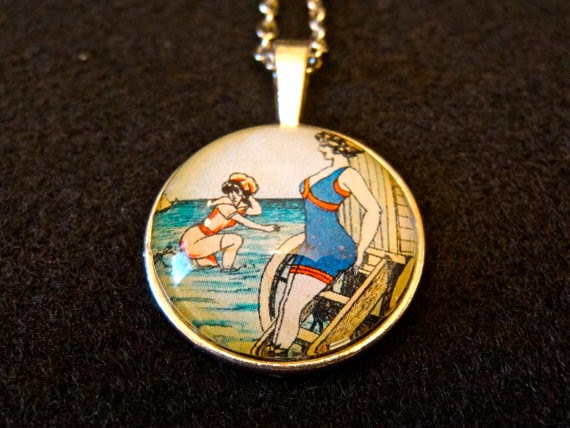 6. Are you working on any new creepy home decor items that you'd like to give us a sneak peek of?

I’m working on a set of his and hers anatomy lamps that are pretty amazing, as well as a new “Specimen Line” that should be coming up before Halloween. It will feature altered doll heads mounted in shadow boxes… I’m excited about everything that I make, and if I didn’t have my three year old to keep me in check I probably wouldn’t ever sell anything and nobody would want to come over to my creepy house! 7. Many of your items, specifically the home decor ones, remind me of shows like oddities. Do you think shows like that have helped spark in interest in work like yours? Why or why not?

I think shows like Oddities and Freakshow have definitely made interest in work like mine more socially acceptable and more accessible. It certainly doesn’t hurt. ;-) 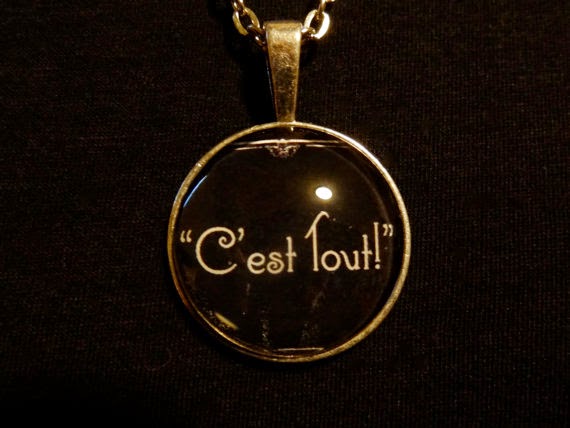 8. Since I can't do an interview without a horror related question, what is your favorite teen scream movie? why?

Does “The Lost Boys” count as a Teen Scream movie?
The Lost Boys exposed me to The Doors (awesome!), made me want a husky, and made me wish that my parents had given me a cooler name like “Star.” The camera perspective of the vampires hunting over the amusement park was AWESOME. That seven deadly sins song is playing in my head right now as I think about it! Iconic. 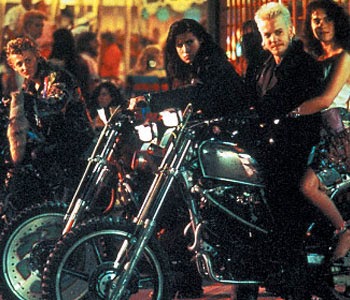 If you would like to know more about Allison and her work, you can find her all over the place!

SHOP Prim and Grim on Etsy

ADD Prim and Grim on Pintrest

CLICK HERE for the FEARce Five post Allison and I put together on Short Films: Horror Edition. 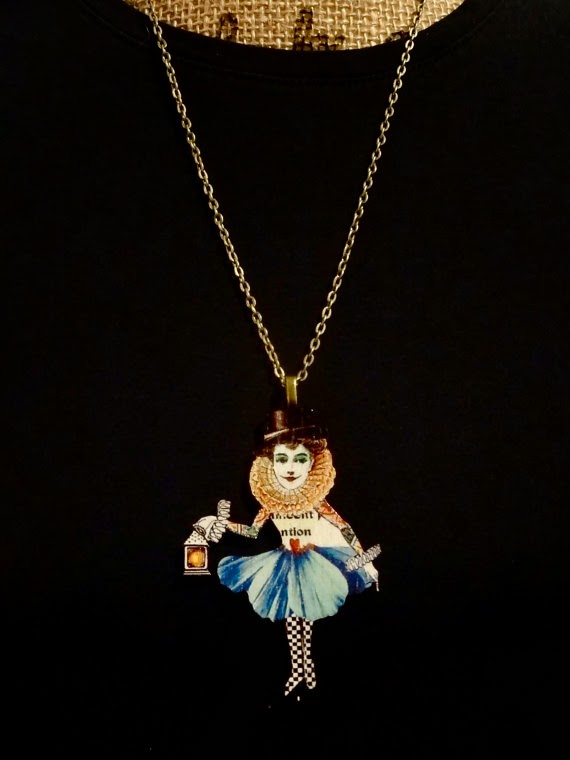 Posted by AGhoulsBestFriend at 5:29 PM