I have a had a ton of people asking me when I was going to bring the FEARce Five back, well, today is the day! I am so proud to, not only ressurrect my FEARce Five posts, but to start off with a collaboration! The lovely Allison from Prim and Grim agreed to be a part of my double creature feature. Yesterday, I shared my interview with Allison about her shop, and today she will be chatting with me about short horror films. 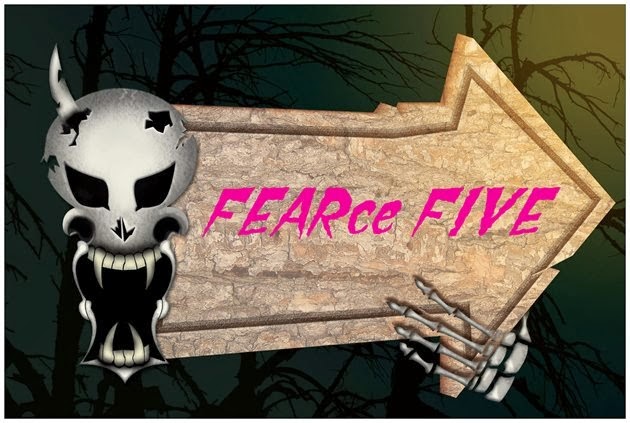 In the past five years, the amount of people making short horror films has increased. I think a lot of this has to do with access, inspiration, and instant gratification. These three things, in my opinion, definitely help get the ball rolling on and idea and then help follow through with it. I sound like one of my sociology teachers.

The access part of that has to do with how easily it is for people to shoot, edit, and upload a video, and being able to do this in the comfort of their own homes. Not to mention, everybody knows somebody who is a whiz when it comes to editing, music, or, at the very least, owns every gadget known to man. ***cough*** James and Curtis ***cough***

As far as inspiration goes, short films and horror are everywhere! Does anyone else remember the Masters of Horror craze from a few years back? This was an anthology style series that had hour long movies (or episodes) that where horrifying tales directed by big name directors. These big names included John Carpenter, Dario Argento, Lucky McKee, John Landis, plus a few more. There are also clip movies all over the place these days. Movie 43 is the big one I can think of, but as far as horror goes, there are films like The ABC's of Death and V/H/S.

We are living in the time of YouTube. Any and every joe blow with a smart phone is now YouTube famous over night. Everyone is looking for that viral video to make their career. By the way, if you don't think being YouTube famous is that great or that hard, check out people like Shane Dawson, Jenna Marbles, Tyler Oakley, The Fine Bros, or SMOSH. I could do an entire post on these folks, but that will happen another time, I don't want to lose focus. However, my point in mentioning these people is that they aren't YouTubers that make viral videos. They are just a bunch of individuals that have ideas and take the time to make them into a video and upload them to the internet. When something is good or something is funny it catches on. People share links and before you know it, BAM! 200,000 views and just as many thumbs ups. People are sending you comments about how awesome your video is and are even asking to see more of your work! YouTube and social media are the key factors in this instant gratification. The film Mama started as a short horror film and look at how that blew up!

Now that I have rambled on about the topic, I think it is time to hear from Allison. I had a few questions for her on the topic...

I will start this post with a paragraph or two on short horror films, followed by our questions, an then your top 5 and my top five.

1. How did you first discover the mass amounts of short horror films that are all over the internet? Which one was your gateway film?

I actually didn’t find out about the short horror film genre until a couple of years ago when I volunteered at the Mile High Horror Film Festival. There are lots of interesting jobs involved with running a film festival, one of them being a “Screener,” which is someone who sits in the theater and monitors the sound volume, room temperature, and general audience behavior, and alerts someone if there are any issues that arise. The best part about being a “Screener” is that you get to watch the film too! I was lucky enough to get assigned to a “shorts program.” There were around seven short films in the program, but one in particular has the honor of getting me 100% totally excited about the short horror genre. That film is called “Rotting Hill” from Media Design School's Graduate Diploma of Advanced 3D Productions. It’s a four minute zombie love story. You can watch it for free on YouTube HERE.

2. Do you think that short horror films have paved the way for movies like V/H/S and The ABC's of Death to become as popular as they are or do you think it is the other away around?

Hmm. This is a tough question. I have to admit that I haven’t seen V/H/S, but I’m familiar with ABC’s of Death thanks to director Mike Tack of Apocalyptic Conservatory Studios, whom I had the pleasure of meeting last year. Mike let me preview his submission for ABC’s of Death 2, “M is for Makeover.”

ABC’s of Death is a compilation of horror short films, so I think that the two ideas (short horror films paving the way for ABC’s of Death or vice versa) are inseparable in that regard. I think it’s awesome that short horror films are getting mainstream recognition! So much ingenuity is required to make short, memorable films, especially on a limited to no budget. It’s truly an art form. I think short horror films being featured in an anthology of sorts, with a broader audience, is a huge accomplishment for the filmmakers who are featured (who may not have been able to accomplish a fan base as large otherwise).

You can view Mike Tack's gorrific short film (a great example of how to go gore or go home), "One Careful Owner", as well as his ABC's of Death submission, "M is for Makeover," HERE on his YouTube Channel.

3. Do you think short horror films are scarier than longer, full length horror films? Why or why not?

I think they can be, if done well… Because they are so short, I think there is some freedom to go gorier than one might with a feature length film. Also with such a short time frame to convey your message, a lot of really common fears become the focus (a car accident, a crazy hitchhiker, a black market organ transplant, etc.). Sometimes these fears are the scariest because they hit so close to home.

I completely agree. Sometimes a story with a great build up makes everything scarier because you are waiting and thinking. Ohh, there is an escaped loon running about. Okay. Ohh, he escaped an hour ago, okay. The hospital in down the street from my house, huh. Ohh, maybe I will call mom real quick. Phone is dead and I have no signal, damn my luck. Was that a knock at the door? Okay, I might be nervous. Didn't I close that window? Kind of freaking out. The power in the whole house goes out! Okay, I am officially freaking out! However, on the flip side, when you take a common fear like the feeling of being watched paired with the time limit of a short film, you don't have time to linger, just panic... especially if the film is done juuuusssst riiiight.

4. I once heard a popular YouTuber, Shane Dawson, say that people don't like to watch videos that are more than ten minutes long. When a person sees something that is 4 minutes versus twelve, they are more likely to view the shorter video. Why do you think that is and do you think people feel the same way about short horror films?

I think that by nature people have shorter attention spans nowadays (I know that I do, and I blame my smart phone). But people want to know what product they are buying, or what their precious time is going towards. I think this does apply to horror movies.

Now let me switch gears a little… horror gets us riled up. It’s addicting! I’ve found myself at the end of a seventy minute shorts program feeling sad that it’s over and wanting to see more… it’s like a short fix that we just can’t get enough of... plus, if it’s too scary, there’s the reassurance that it will all be over soon.

5. If you were to make a short horror film, what would yours be about?

I actually have a script floating in my head that I ran by a screenwriter friend of mine. He have me a lot to think about; it could really go in a lot of directions… that being said, I don’t want to give anything away but it involves the idea of being buried alive…

2. “Vienna Waits For You”
directed by Dominik Hartl )

4. "There Are Monsters"
presented by Jay Dahl

We hope you enjoyed today's FEARce Five! If you have a short horror film that would would like to share with us, leave the name or the link in the comments below.

CLICK HERE to check out my interview with Allison!

Sara
Posted by AGhoulsBestFriend at 4:29 PM