Marina de Van is In My Skin

I pride myself on saying that I will watch any thing at least once. I may not want to pay $12 to see it in a theater, but in the comfort of my own home, I will watch anything. The good, the bad, the low budget, the gore, the cutesy, the bland, the stomach churning, the over the top, and even the controversial. I don't care. It's who I am. I recently watch a film that was mentioned in an article a friend passed my way called In My Skin. 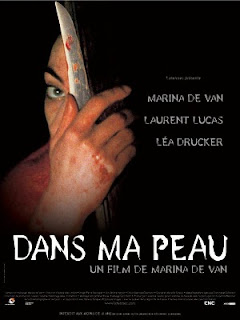 In My Skin is a French film that isn't quite horror, nor is it shocking as far as gore hound standards of today go, but I kept hearing about it and had to see what all the fuss was about. The film takes place in France and revolves around a lady named Esther. She has a boyfriend, a close friend that she works with, and is trying to get a better position at her company. Normal, right? 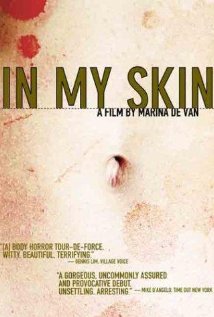 Early on in the film, Esther is at a party where she injures herself in a dark area. She doesn't think much of it and continues drinking. When she goes to the restroom, she discovers blood and skin all over the floor and soon realizes that it is coming from her. She lifts up her pants leg to find a huge, gaping, lesion on her right leg. She freaks out that someone will find out, covers her leg up, and goes back to party. Not only does this bloody loon go back to the party, but she says she is not tired and recommends that her friends go to a bar with her for another drink. Eventually, Esther goes to a hospital. 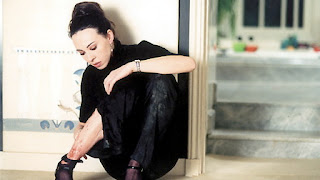 While at the hospital, the doctor working on Esther asks her a series of questions. He can tell that the wound is not very recent. He asks her why she waited so long to come to the hospital. Esther claims she didn't notice anything was wrong. The doc then says he has heard of shock doing strange things to people, but that at the very least she should have felt her leg being torn open. When you see the gaping wound from hell that goes from her knee to her ankle on the side of her right leg, you will understand why this is so astonishing. Again, Esther plays stupid and says she felt nothing. The doctor is now concerned and has her look away while to touches her with a smooth, flat items and a needle and makes her say if she feels something smooth or sharp. She passes with flying colors and is released to go home. 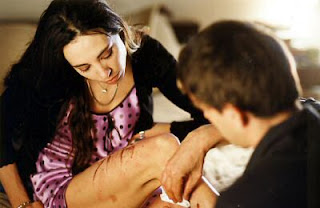 At first Esther doesn't tell anyone, but gradually her boyfriend and close friend find out about her wound. They are concerned and try to monitor how she is healing. Meanwhile, Esther is becoming obsessed with the wound. She sneaks away from her desk at work to look at it and touch it, but this is not enough. She has decided to start to cut and carve into her own skin that wasn't cut during her initial injury. From here on, things only get worse. I won't give away the ending or the dinner she has with clients or the date she has with herself and a knife at a hotel room, but if you can last that long, you won't be super disappointed. 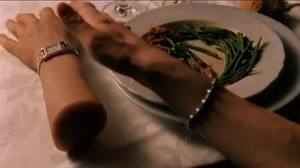 There is some interesting info about the film and it's director that I am going to share. I tried to learn more about the film and the director, but there isn't much floating around about either. What I can tell you is that this is a French film that came out in 2002. In 2003 it won the the title of Best International Film at the Fant-Asia Film Festival. The main character of this film is played by a French woman named Marina de Van. Marina also wrote and directed this film. Marina was born and raised in France, has a degree in philosophy and went to film school. She has made a few films and has won some awards in the past. In My Skin was her first feature film. 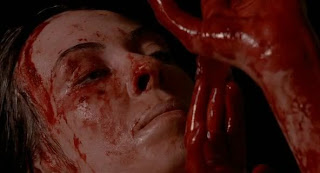 Watching this film was unsettling. Not necessarily because of the shock value, blood, and self mutilation, in my opinion. Throughout the film, Esther becomes obsessed with harming herself. She almost never seems to be in pain, but she definitely is getting a rush from the experience. I don't fully understand why she becomes to obsessed with cutting herself. Before she starting hurting herself intentionally she was so embarrassed about her leg that she wouldn't tell any one about it and always made sure it was covered, even when it was mostly healed. She was very careful to make sure no one apart from her friends knew about it. At one point her wound reopens at a public place, staining her khaki pants with blood. The look on her face is unforgettable. She turns pale and looks like she is struggling to breathe and focus. She then runs to her car to change her clothes before any one notices, but at the same time she brags about the first time she cuts herself intentionally.  Maybe I am unsettled by this behavior because it doesn't sound like typical behaviors of a self mutilator. 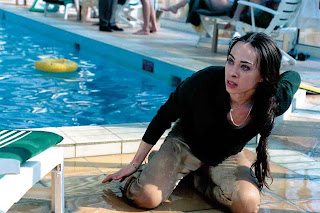 Most self mutilators don't brag about their behavior or show it off. In fact, most will go out of their way to make sure no one finds out, even if this means wearing long sleeved shirts in summer or cutting themselves close to their underwear so no one is likely to see the scabs and scars. Also, a lot of self mutilators are people that feel like they need to be punished, usually by a behavior that isn't their fault. For instance, there is a large correlation between self mutilation and victims of rape. I also know that there are some circumstances where people that have a negative body image of themselves use self mutilation to take their anger out on themselves. However, the only thing the main character was ever concerned about was the wound she had gotten by accident, so it doesn't make sense to me that she would become obsessed with self mutilation, unless she did it for the rush. 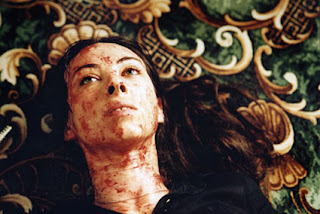 In any case, this is a movie that I have watched once and will most likely only watch once.
Posted by AGhoulsBestFriend at 1:29 PM