Blings to Pay the Bills

There are some people in this world that you feel an immediate bond with. It could be your friend Mike that has listened to your bullshit and is just as addicted to drag queens as you are. It could be your friend Tanya that has an undying love for kitsch and John Waters. It could be that guy, Adam from work that would spend hours listening to music with you because you are into the same tunes. It's amazing the things that can bring two people together. 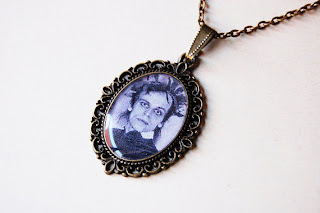 After doing this interview and post, I feel this way with Cristina from Blings to pay the Bills. There are so many things that I hold dear to my heart that she has mentioned whether it was just having Edgar Allan Poe and Vincent Price items in her shop or that she brought up serial killer haters, her own skepticism on ghosts, or just that she mentioned Jamie Lee Curtis. I swear, if she had mentioned John Waters or burlesque I would probably be wondering if we were separated at birth. Anyways, I won't bore you with my crazy banter any longer 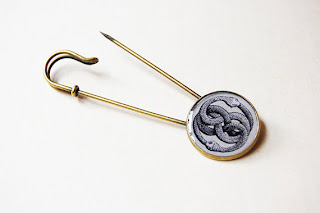 1. What types of items do you make and sell?

At the moment I'm mostly making Victorian-style cameos, but I’m working on new creations like jewel boxes and I'm also experimenting with new materials. We will see :)

The problem is that I’m a worker and a student too, so I have few spare time to work on my creations. 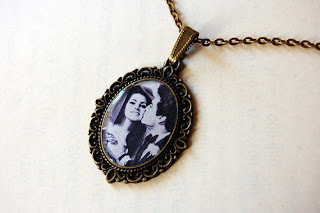 2. How would you describe your style using only five words?

Umh, I'd say: antique, horror, gothic, weird, and nerdy too!

3. How did you get started crafting?

I have been drawing and painting since I was very young, I'm always been an artistic persons. Yeah, I know, everybody says that haha, it’s such a cliché but it’s true! 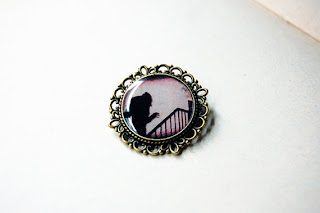 But I started creating cameos just for myself a couple of years ago, when I moved from Milan to a small northern Italy town where shops REALLY SUCK, and to find beautiful “alternative” jewelry is impossible. And I'm addicted to jewelry!

Then people around me showed appreciation and a friend talked to me about Etsy and I thought "Why not? Let's give it a try!" 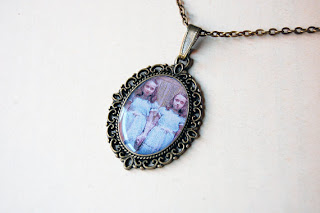 4. I noticed that you have several items with Edgar Allen Poe on them. As a Baltimore gal, these caught my eye from the get go! I adore Poe as well as his work. Do you have a favorite Poe tale?

I'd definitely pick The Facts in the Case of M. Valdemar.
But I adore everything he wrote, seriously. I became a “literature nerd” and I started to read A LOT thanks to him. 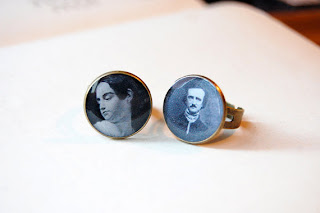 5. I also noticed that you make some Vincent Price items as well. Price has been in several film adaptations of Poe's stories. Did you love for one lead to your love for the other, or have you always been a fan of Poe and Price?

Oh, I LOVE Vincent Price. I truly do. He's just my ideal man. His voice, his accent! I fell in love with him because of Poe (most of the Edgar Allen Poe films that Roger Corman directed – like The Pit and the Pendulum, Tales of Terror or The Haunted Palace - are actually my favourite films) – and because of my mom too! I've been watching horror movies with her since I was a child. I still remember Sunday mornings in our living room, watching Vincent Price films while she was ironing :) 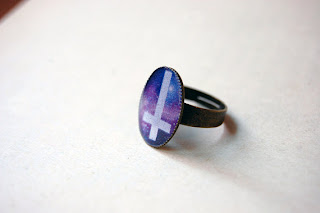 6. I love Ouija boards. Recently, I visited an Ouija board exhibit in Baltimore and they have a fascinating history to say the least. Most tools used to contact the other side or spirit realm have become symbols that have a different meaning to everyone. Some people seem them as evil while others see them hope and closure for their personal lives. Why did you pick Ouija boards to become part of your work and what do Ouija boards symbolize to you? 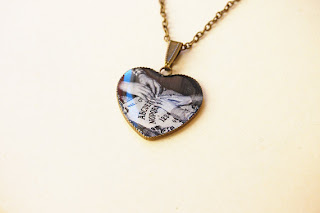 Well, this is also because of my mom. She always been into occultism and spiritism, her passions influenced me a lot. She has tons of books about those arguments that I’ve read too – and a big part that I still have to read.

As an atheist I don’t believe in ghosts or spirits or whatever, but you know, it’s something I’d like to find out some day that I was wrong about. 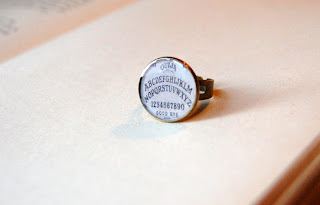 7. You also have a lot of serial killer themed items. I have always been fascinating by serial killers and I am assuming to some degree you are as well. I don't want to ask if you have a favorite because that sounds weird, so... is there a serial killer that you have read about more than others that interests you more than any other? Who and why? 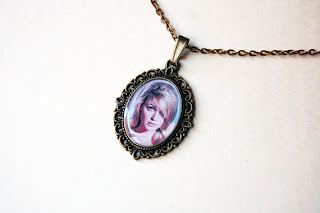 Well, first of all: some days ago an anonymous on tumblr told me "i find the fact that you sell rings depicting murderers who have brutally killed people and destroyed the lives of many incredibly offensive. I advise you to take them down unless you want your tumblr reported". So I'm going to write the same things I wrote on the "Wear if you dare team" on Etsy, talking about this:  probably this person who wrote me is the same kind of person who enjoys waiting outside prisons during executions, partying with his/hers bigot friends.

I think that sometimes people tend to forget that behind a "monster" there is a victim too. Some of this killers were abused during all their childhood in several ways. I'm not justifying them, probably they will never be able to live "in the normal world", but I don't think it's a fair thing to be happy about their death/hate them in this way. 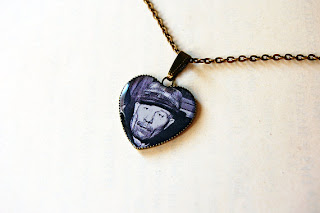 "Then Peter came to Jesus and asked, "Lord, how many times shall I forgive my brother when he sins against me? Up to seven times?" Jesus answered, "I tell you, not seven times, but seventy-seven times."  But hey, christian charity fuck yeah! It's always funny when as an atheist I have to remember to a religious person that his ideology is forgiveness-based.

Probably some people just need to get laid more and go to church less. Surely they need to know more what they're talking about, to read something about those people stories. 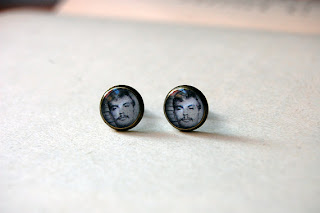 I also think that all this ignorance towards serial killers is because of media and stupid teenagers who idolize them. They don't really know what they're talking about too.

Answering to your question, I’d pick Richard Ramirez. I wrote to him (he's in San Quentin) several times, and was the most human experience I ever had. He's very nice in all his answers. I don't think he's a monster but just a lost soul, he's the result of a REALLY messed up childhood. 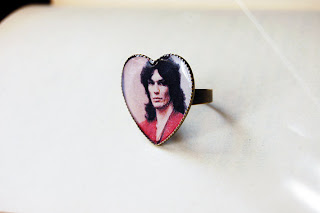 8. Looking through your shop I find items that are sweet and twisted, but they are also freaky and geeky. There are World of Warcraft items and heart charms with 666 on them. Where do you think most of your inspiration comes from with so many different themes?

Haha, this is because I’m a huge WoW nerd! I’m playing less lately and I’m not obsessed anymore like I was before because I simply don’t have the time (and because last expansion really sucks)! When I’m not studying or working I’m crafting, so I think that running a shop saved my life :D

Also as already said it’s all my mom’s fault, her interests about horror and occult influenced me a lot. 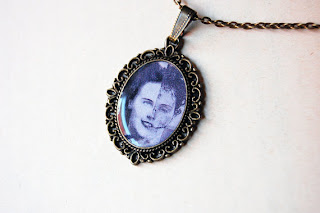 9. Who is your favorite killer from a horror movie? and why?

Definitely Norman Bates. I mean, he’s pretty messed up: he loves his mother and dressing up like her, taxidermy, watching women through a peephole and stabbing strangers under showers. He’s perfect! 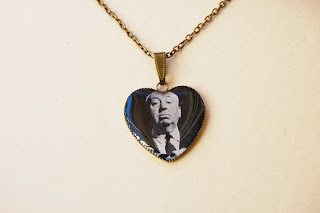 Plus, I love psychological horror films. That’s why I also adore Roman Polanski and you can see some Rosemary’s Baby and The Tenant related creations in my shop. 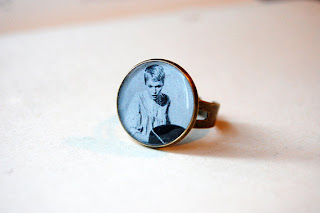 10. Who is your favorite scream queen from a horror movie? and why?

Jamie Lee Curtis. I don’t think I have to explain why, she’s just the best! :D 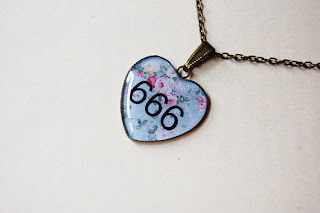 I hope everyone has enjoyed reading Cristina's interview as much as I did! If you would like to know more about Cristina and her shop you can check out Blings to Pay the Bills on Etsy and on her Facebook Fan Page! 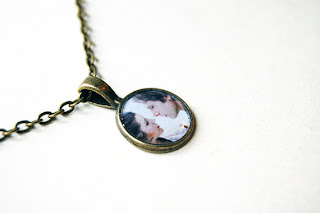 Posted by AGhoulsBestFriend at 11:53 AM