This Ghouls Favorite Horror Films of 2013

That's right, my little deadlings, 2014 is upon us! Whenever a new year starts it is very common for people to do a few things. One, they make a New Years Resolution and Two, they reflect on the previous year. Right now I am going to go back and think of all of the horror movies that were released last year that I fell in love with! I am only basing this on the films I saw, so if I leave out a favorite of yours, please leave a comment in the section below. I love recommendations as well. 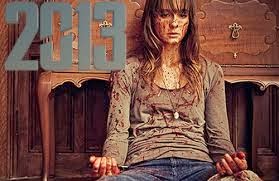 So, the first movie that comes to mind is Evil Dead! This one stole my heart, shredded it to bits with a chainsaw, and then re-animated it for round two! I went into this knowing I was already going to love it. I love the original, I love the cast, and the trailer gave me goosebumps. The day it came out I saw it and didn't love it.. I mother fucking worshiped it! I was so head over heels that I saw it again less than 10 hours later. 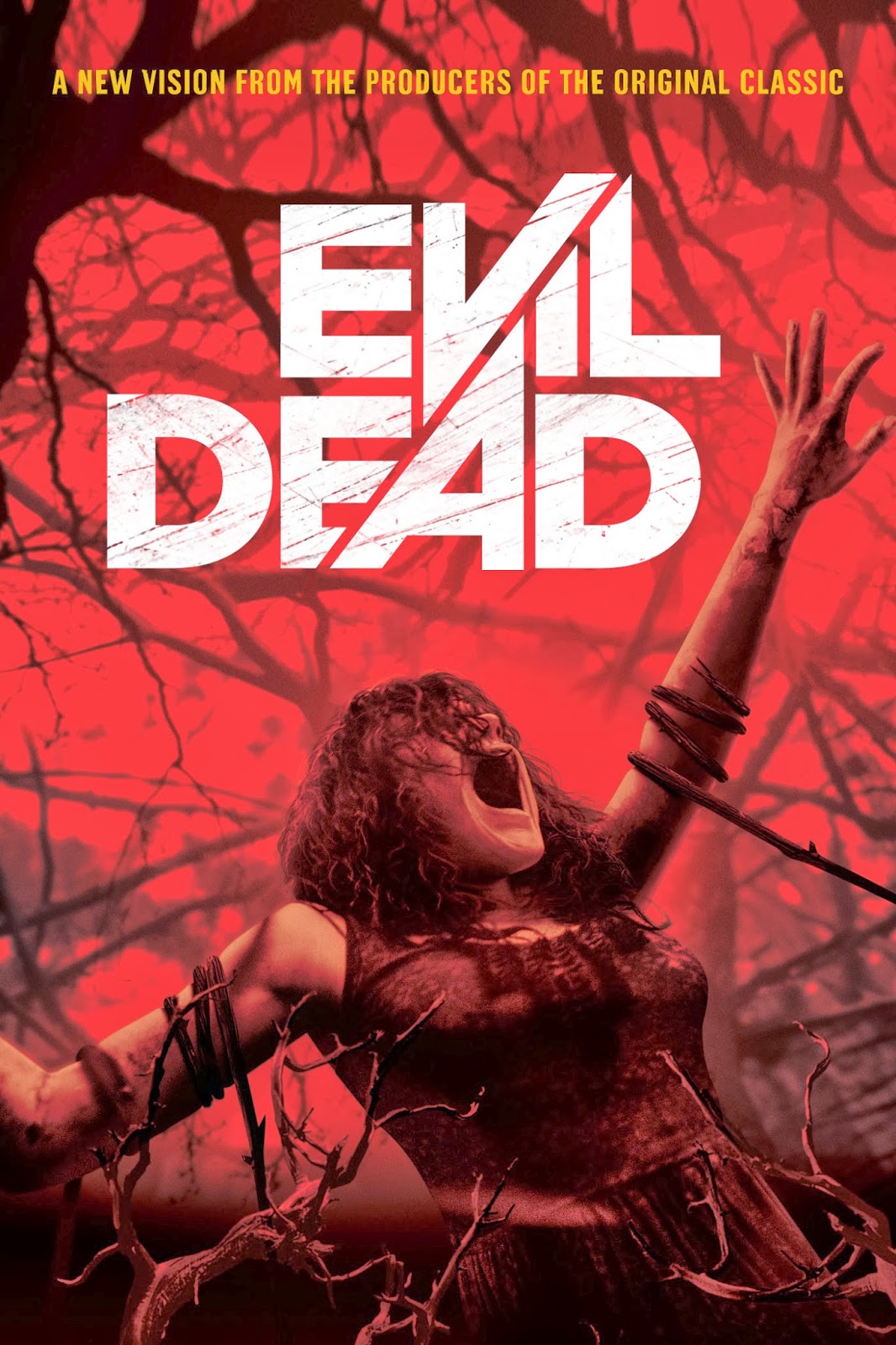 This was, and still is, the best reboot I have seen in years (no offense Rob Zombie) and I don't hate remakes or reboots... so if that doesn't say something, I don't know what does. I am not one of those people that gets their panties in a bunch over a remake, even one of a classic horror film. When someone decides to remake a famous film there is no pleasing 100% of the viewers. You will always have someone that wants a retelling of the story with a new or modern twist or, on the flip side, you will always have someone that wants to see a the same story, but with better effects. Then you have people like me. I love horror and I want a good movie with a great cast, an awesome script, and kick as special effects, same story or a reboot. Good horror is good horror.

I got a bit off topic. Bottom line, if you love a good gore fest filled with more blood than all the Scream movies combined, see Evil Dead!

Next on my list is American Mary. Not since Angela Bettis in May have I been so enamored over a horror movie based around a female lead. The Soska sisters really made their mark with this one! Here you have Katherine Isabelle as Mary Mason. Mary is a medical student studying to become a surgeon, but her lack of funds is threatening this dream. She ends up finding a way to earn easy money be performing underground surgeries for people wanting unconventional body modifications. I don't want to give the whole story away, so I am going to leave it at that. This movie has a great story line, some unforgetable characters, and will leave you with the thought "Is a split tongue just a body modification, or can it be art?" If you watch this, which you should, keep an ear our for the scenes playing "Ave Maria". This song plays a few times throughout the film and becomes more complex to mirror Mary's skill level.

Maniac is another film that came out from nowhere are made me fall in love with it. Maniac is another remake. The original came out in the 80s and not too many people that I know were even aware that this newer one wasn't an original. I love when this happens to lesser known films, this way there is less of a crowd to dismiss a film simply because it is a remake. Also, it will give the original film more attention. I hate the idea that a horror film will be forgotten simply because it is old and wasn't a blockbuster. 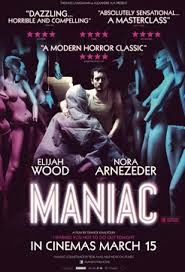 Anyways, back to the film... Maniac stars Elijah Wood as Frank, a young man who takes over his families mannequin business and is helping an artist with her exhibit. Frank had a strange childhood growing up with a mother who was a prostitute and let men do awful things to her, some of those things witnessed by Frank as a child. Growing up like this gave Frank strange compulsions and have also led to him never having meaningful relationships with women.

This movie is creepy and amazing. When I am at home watching a movie I am usually just half watching it. I might be reading, crafting, or doing laundry while it is on. If a movie is good I will replay it several times during the week and even make my husband watch it. This film had my attention the entire time it was on. I just sat on my ass, under a quilt with a pet my my side. One aspect of the film that stands out the most is that the entire movie is shot from Frank's perspective. You only ever see him if there is a mirror or a window where you can see his reflection. Overall, this movie kept me watching and wishing that Elijah Wood did more films like this. I would also like to mention that I never had a crush on him until I saw this film, which probably says all sorts of fucked up things about me.

Another film I adored was The Purge. Some people call this a thriller, others call it Sci-Fi with the futuristic setting, I call it horror. The country has 12 hours where all crime is legal and a groups target is locked in your house and the group knows it and will stop at nothing to get him back... If that isn't scary, I don't know what is. 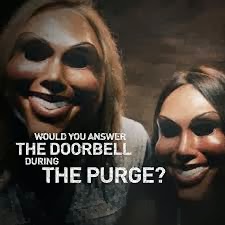 If I had to describe this movie as anything it would be the best B rate horror film ever! Nothing about it was over the top, except the concept. It had a good story, a good cast, and the last few minutes made me laugh so hard I almost peed my pants. If this film had a smaller budget and some lesser known actors, it probably would have straight to video and would
have a cult following by now.

On to the next one on my radar is Lords of Salem. This movie was strange and left a lot of questions unanswered... and I'm okay with that. Not everything has to be wrapped up into a nice, neat little package. Not everything needs a happily ever after, though that depends on what character you're talking to. This film is visually stunning and confusing. There is hardly a scene where you can look at it and not say to yourself, "oh that's pretty". Everything reminded me of a Kubrick film. Why that wallpaper? Why that room? Why that wall art? Why those night stands? Everything felt like there was a story behind it that only Rob Zombie knew and I like that. Besides, what fun is a riddle that you can solve in a few seconds? 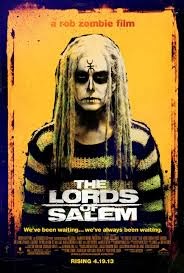 Since this is a Rob Zombie movie, the usual suspects are present, plus some other familiar faces. I will say, this movie isn't going to be for everyone, so don't think that just because you liked my recommendations in the past that you will like this one.

Last, but not least, I must mention The Conjuring. I wasn't sure what to expect. The trailer was awesome, but I was worried that it may have given away all of the only good parts. Thank god I was wrong! It kept me on the edge of my seat, talking to the screen, and wanting more. Not to mention, I have a serious lady boner for Patrick Wilson. This is another film I saw saw twice in theaters and purchased. This is one of those films that will always be somewhat creepy if you watch it at night with the lights out. I honestly can't think of a single flaw. I became some obsessed with the film that I started making items with Lorraine Warrens and other images from the film for sale in my Etsy shop. Two of which have sold in the last few days. If you love a good haunted house flick, this is for you. I don't want to say too much because I don't think anything I have to say will do this film justice. 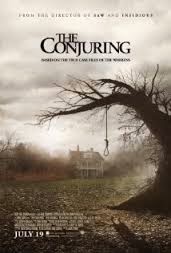 A few other films I saw this year that are worth mentioning include You're Next, ABC's of Death, Mama, V/H/S 2, and Texas Chainsaw. I told you I love a good remake. 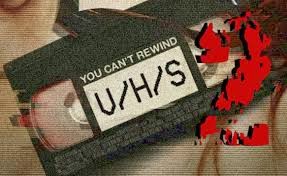 World War Z was another good one. I am about to geek out, so don't judge me... but am I the only one amused that the next Doctor for Doctor Who, Peter Capaldi was credited as a W.H.O. Doctor in World War Z? Ohh aaaaaaaannnnd he was in Torchwood!?!! Who fans know! Okay, now that I have made a dork of myself, I hope you all enjoyed my list and if you saw something I didn't and have a recommendation, please leave it in the comments below!

Sara
Posted by AGhoulsBestFriend at 4:43 PM