"Great art is not meant to make you comfortable; it's supposed to make you think and feel. Sometimes it has to shock us, smack us in the face and break through our defenses in order to poke at the soft, unprotected parts of our brains... which we don't always want to see. But isn't that one of the definitions of horror?" -Gregory Burkart 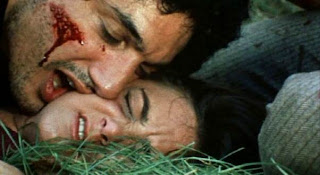 This is one of my most favorite quotes tied to horror. So many times I feel the need to justify and defend my love for movies covered in blood, rape, mayhem, and that which is taboo. I love shock value, exploitation, and the obscene. I do watch other genres where there are happy endings where the boy gets the boy or the children raise the money in time to save the house, but at the end of the day what I really want is blood, guts, and angel cake. 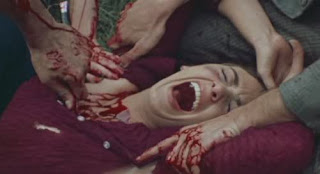 One of my most favorite directors is Wes Craven. This man is amazingly talented when it comes to horror. His trademark style of horror comes in many forms. His films typically have ordinary characters that are caught in extraordinary, terrifying, and horrific circumstances. His protagonists usually come up with elaborate traps to catch and or kill their predator(s), which are usually amazingly brutal and quite often violent. He also likes to write characters that are strong females, both good and evil. He is considered to be responsible to reinventing the youth horror genre with the ever popular film, A Nightmare on Elm Street. He is also responsible for being the master mind behind the Scream series, Shocker, Swamp Thing, The People Under the Stairs, and The Hills Have Eyes, just to name a few. His first feature film was The Last House on the Left. 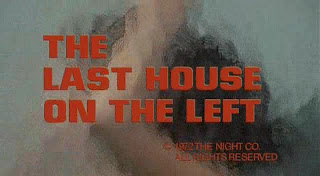 The Last House on The Left is a brutal, violent film about a young girl named Mari Collingwood who has just turned 17. She has plans to go out to the city with her friend, Phyllis Stone to celebrate. Her overprotective parents give Mari a gift (they give her a peace sign necklace, which she wears as soon as she opens it) and reluctantly allow Mari to go to the city with Phyllis, unsupervised, for a concert. Naturally, there is news of a recent prison escape involving an assorted group of ruthless criminals. The group is made up for 4 people, Krug, Junior, Sadie and Weasel. Krug is the leader of the group as well as a known rapist and serial killer. Junior is Krug's son who is kind of along for the ride and doesn't know much better than what is going on around him. Sadie is the only female in the group and is a sadist as well as a psychopath. Weasel is a child molester, peeping tom, and a murderer. Before Mari and Phyllis go to the concert they decide to try and score some marijuana and run into Junior, who takes them to where the other three criminals are staying claiming to have pot. The gang then begins their torture on the two girls which involves humiliation and rape. Meanwhile, Mari's parents are waiting for her to come home to a surprise party. The next day the gang decides to leave the state and take the girls along for the trip. Ironically, their car craps out on them very close of Mari's house. They gang walks through the woods and continues to torture their victims in ways that I won't go into for anyone that hasn't seen the film, but the end result is both girls are murdered. After the gang cleans themselves up and changes out of their bloodied clothes, they go looking for a place to stay and end up at Mari's parents house. While there, Mari's parents discover the bloodied clothes and the peace sign necklace and decide to take matters into their own hands. This is where Wes Craven's trademark elaborate traps come into play. I won't tell you what happens at the end, as not to spoil it for anyone that hasn't seen it, but it's definitely worth a watch. 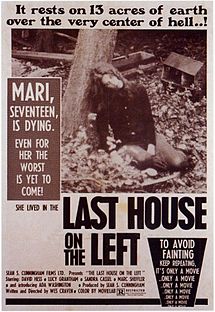 What can I say, Wes Craven certainly knows how to make a directorial debut! This film came out 40 years ago! In fact, August 30th will be the exact date of the films release. This, like many American and Italian films at the time, was a controversial film. Generally, it was received positively, but with all films with graphic and hardcore imagery and language, there were some censorship issues all over the world. The UK and Australia had the hardest time allowing this film to be viewed in their country. Australia kept this film banned until 2004 and was finally released in the UK on dvd in 2003.Mark Kermode, a film critic from London, called the film, "horrible, grim, and nasty," and that its idea that "violence begets violence comes off as obnoxious." However, he also described this film as a "very, very important work in the evolution of American horror cinema." When it comes to art, music, and film there are many ways artists get inspiration and find ways to comment on society. It is believed that one of the main events that influenced this film, it's development, and the attention it received when released had to do with the Vietnam War, especially the television footage of the war. The Vietnam War was the first war that was televised. This brought the horror of war into the homes of Americans. People could see villages being burned, children being murdered, and their own soldiers being brought home in body bags. This type of brutality being seen everyday and everywhere in the United States may have very well impacted Wes Craven 's decisions when writing and directing The Last House on the Left. 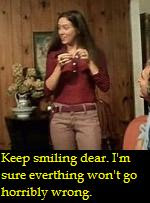 Overall, I love this movie and I love Wes Craven. I think both Wes Craven and The Last House on the Left are more than meets the eye. There is so much to be said about his depth in writing as well as his effect on American cinema, especially in the horror genre. Some people may think his is overrated, but I think he is underrated. Wes Craven is a creative genius full of witt, aggression, good humor, tenacity, and definitely stands out. I can't wait to see what he comes up with next! 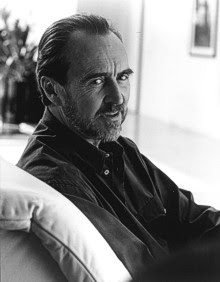 On a side note, A Ghouls Best Friend is celebrating the 40th anniversary of The Last House on the Left with a 40% off coupon! You can save 40% off your entire purchase with the code: THELASTHOUSEONTHELEFT. This offer will expire August 31st, so take advantage while you can! Use the coupon code at checkout!


Posted by AGhoulsBestFriend at 12:30 PM